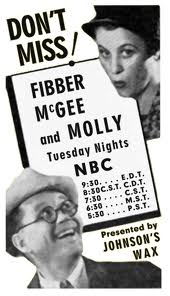 (63 Episodes)
"The Fibber McGee & Molly Show," one of the longest-running radio sitcoms, premiered on NBC Radio Network in 1935, remaining popular until its demise in 1959, long after radio had ceased to be the dominant form of American household entertainment.

* SYNOPSIS:
Much of the show's humor relied on recurring gags, unseen regulars & punchlines that popped up here & there for its many broadcast years. ** THE McGEE'S HALL CLOSET **: One of the running FM&M jokes was about the McGee's hall closet. For example, "Fibber Snoops For Presents In Closet." Another closet storyline was the episode named "Hall Closet." These are just two of the many FM&M episodes which brought up mention of Fibber's messy hallway closet.*

* SPONSOR: In a style not unusual for the classic radio years, the program would usually open the 29-and-a-half minute broadcast with the audience in full laughter, as Harlow Wilcox announced: "The Johnson Wax Program with Fibber McGee and Molly!" Wilcox's intro pitch lines usually were met with groans or humorously sarcastic lines by Fibber.

During the many years that the show was sponsored by Johnson Wax, Fibber nicknamed Wilcox "Waxy," due to Wilcox's constant praises of their various products. Each episode also featured a mid-show appearance by announcer, Harlow Wilcox, whose job it was to weave the second ad for the sponsor into the plot without having to break the show for a real commercial.

Reviewer: AncientAxim - favoritefavoritefavoritefavoritefavorite - January 4, 2020
Subject: Fibber McGee & molly cherished OTR program
Fibber McGee I did not discover the show until relatively recent- even tho' I listen to a LOT of otr programs- not sure why I didn't listen to them earlier, but I adore them. Sure wish I had grown up during the era these were aired on radio. What a wonderful time, and what great, really hilarious skits & jokes! I am no where near old enough to "remember OTR" but these are gold.

Reviewer: jtyroler - favoritefavoritefavoritefavorite - January 21, 2013
Subject: To jbenny
The reason possibly (I haven't listened to them yet) is that Harold Peary appeared on several episodes of The Johnson Wax Program (Fibber McGee & Molly or Fibber McGee & Company while Marian Jordon was away from the show dealing with her alcoholism) prior to the character of Throckmorton P. Gildersleeve becoming the next door neighbor.

It's really this episode:
420421_Out_To_The_Ballgame.mp3
though it may not be the same physical recording.